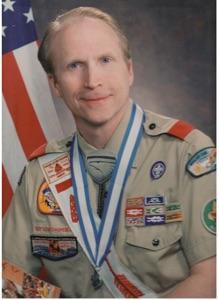 Robert Lynn Horne began his journey with the Boy Scouts of America when he said his first Scout Promise in 1957. His first pack was Pack 28, which was headquartered in Shreveport, Louisiana. His first and only den mother was his own mother, Alma Horne. In 1960, Dr. Horne and his father Bob Horne joined Troop 18 in time to attend their first father-son camping trip to Lake Narrows. Some of Dr. Horne’s proudest moments in the Scouts include the pinning of his Eagle medal in 1962 and when he placed the Vigil Honor Sash on his father in 1966.

Dr. Horne developed a love of scouting around the world when he earned his Citizenship in the World merit badge. After attending the 1967 World Jamboree, he decided to dedicate his life to Scouting. In addition to four World Conferences and eight Regional Conferences, Dr. Horne has now attended eight World Jamborees and 13 National Scout Jamborees of the BSA.

In 1996, Dr. Horne founded the Las Vegas International Scouting Museum, a 501 c(3) charitable organization. He served as the organization’s first President and is currently the Executive Director.